Differentiation. One of the most important things in every classroom, but sometimes the hardest to manage. Especially in Technology when groups aren’t setted!

Differentiation was one of my NQT targets and after working on various resources for different types of pupils, I decided to develop ‘Skills Strips’.

I started my research by looking at low achieving boys in my classroom. I asked a selection of boys some questions to find out why they thought that they were struggling. Most of the boys had high OPT grades, but their Technology book work was sometimes messy, incomplete or of a very low standard.

One of the things that all of the boys mentioned, was that they couldn’t remember the instructions that the teacher had given them after the tasks were set (Even though they were listening). They also said that they needed visual examples of tasks that they could have in front of them.

Using these two starting points, I was able to create ‘Skills Strips’. Each strip is designed to show pupils how to complete basic Graphic Design skills such as sketching. The strip uses visual step by step guides as well as written instructions. It is the size of a large ruler, so it can sit at the top of a pupils book as they work.

I started with the skill of sketching as this is commonly used within my classroom and pupils are taught how to sketch in a certain way to ensure that their designs are drawn to a high standard. My initial design had paragraphs of text underneath each step rather than simple sentences and when I conducted some pupil voice, some students suggested that this was unnecessary as they didn’t want to read large amounts of text. Taking this on board, I decided to bullet point the instructions and make them more interactive for extremely weak pupils. I laminated the strips and added tick boxes to the separate instructions so that pupils could use a whiteboard pen to tick off the steps as they went along. This worked really well and weaker pupils seem to enjoy this option.

Once I had the perfect design for one Skills Strip, I decided to make some more! (Reflecting, Cutting, Isometric, Evaluating, Sketching, Annotating).

The colour coded bands make it easier for pupils to select the skill that they need.

I then hole punched each Skills Strip and asked the department technician to create some wall boards so that pupils could easily access them as they do with other classroom stationary (see below). 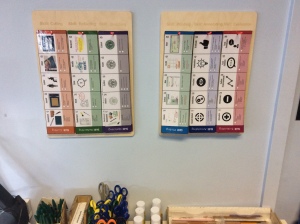 So far, Skill Strips have been a massive success. Pupils of all year groups use these on a regular basis and access them themselves when they need to. The work, of not only low achieving boys, but any gender and ability has improved and pupils are making positive progress. Some pupils said that they only had to use them for the first few times and after that they could remember the steps without the Skills Strip to hand.

For me, I find it much easier to teach groups of different abilities now, because instead of having to explain simple tasks to different pupils such as printing, I can tell a pupil to be more independent and grab the printing Skill Strip off the wall. Best of all, Skills Strips are fully editable and adaptable to suit a variety of skills and subjects!